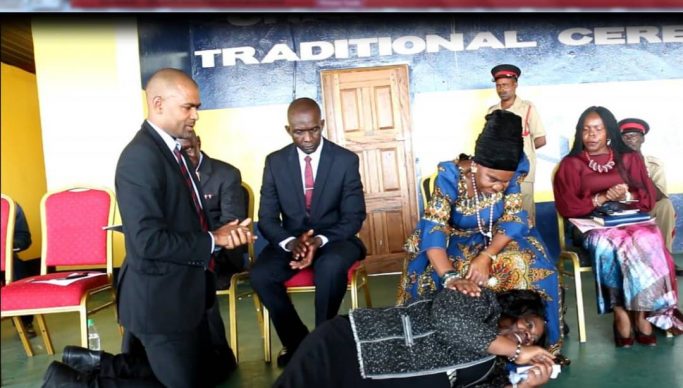 Minister of lands Jean Kapata and chiefs affairs minister Vincent Mwale today rolled on the ground and knelt down respectively, as they apologized to Chieftaincy  Nkomesha Mukamambo II of the Soli people  for  invading her traditional land in headman Chitumbo’s area in Chongwe.

Kapata who appeared subdued by the chieftaincy’s emotional narration of the turn of events, said she was sorry that her Surveyor General Joseph Minango did not consult her before moving into her area for the surveying activities.

Speaking during a meeting at the chieftaincy’s  palace in Chongwe  today, the Minister, who was accompanied by  Mwale and the Lusaka Province Minister Bowman Lusambo said the intention of the surveyor  was not to alienate her subjects but rather serve their interests.

“We are trying to determine Chiefdom boundaries by carrying out the survey so that we can know where traditional land begins and ends. I am sorry I didn’t inform you in advance of what our mission was in your area. I am equally sorry that I couldn’t write to you directly to intervene in sorting out this issue but through your Ministry of Local government and Chief’s affairs. We are not giving title on traditional land but state land so that people can be empowered to acquire loans and other benefits through the same document,” she said.

The Minister promised the traditional leaders that the government was not going to ‘touch’ traditional land country wide in its quest to put idle state land on title.

“We are aware as government that 90% of the land in Zambia belongs to traditional leaders and only 10% belongs to the state. Therefore, when we are carrying out the national survey we are concentrating on state land so that Zambians’ are empowered and government can earn some money through the issuance of title deeds.

And Mwale said the government was encouraged by the response of the chieftaincy to accommodate them despite the mistake they made through the surveying exercise.

“We are so grateful your royal highness for hearing our plea and allowing us to collect the confiscated equipment after we made a mistake by moving into the area without informing the chiefdom. I’am so grateful  for giving us this chance. You are a parent indeed and we are inspired,” he said.

And chieftaincy’s Nkomesyha said she was humbled by the Minister’s gesture in exhibiting remorse  after their colleague Lusaka Minister Bowman Lusambo showed  lack of respect by earlier challenging her concerns.

“I am catholic and so are you (Kapata). Mumbi Phiri is also Catholic and we get along very well so you are forgiven. I am not against government but against wrong actions. For me I work with the government of the day. I kept the equipment from May this year because I was not being given satisfactory answers of why surveyors where found in the area illegally and carrying firearms. My chiefdom decided to keep the equipment until you people came to iron out this case. ”she said.

chieftaincy’s Nkomesha said she refused to have the meeting held in Lusaka when the Lusaka province Minister asked her to go to Lusaka with eight of her headmen because this was not going to be representative of the 355 headmen  that she serves.

The chieftaincy confiscated G.P.S survey equipment in May when she found ‘intruders’ surveying her chiefdom  without consent. The equipment is one of the three worth US$60,000 each.