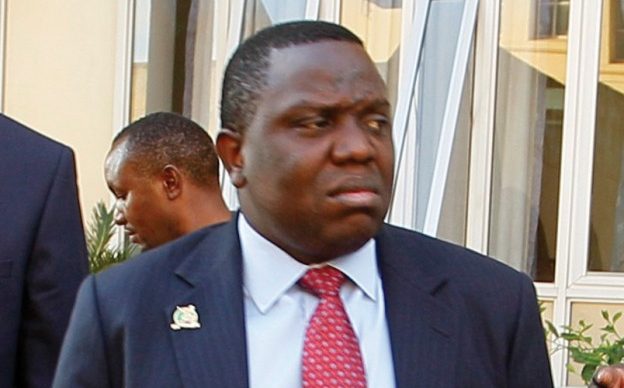 HARRY Kalaba says high-ranking officials in the PF government spend more time, from morning to evening, planning on how they can defraud the country.

Meanwhile, Kalaba, who is Democratic Party (DP) president, has asked President Edgar Lungu, “in his humility,” to re-open the Copperbelt University (CBU) in Kitwe.

The FIC 2018 report, that was released on Friday in Lusaka, revealed an increase in cases of suspicious transactions reported which now amounts to K6 billion.

The undisclosed law firms were reported to have been engaged in money laundering scams amounting to K365 million.

Reacting to the report, Kalaba said he was “very saddened” that corruption in Zambia, as ‘detected’ by the FIC, was growing every year.

“In 2017, we read that financial misappropriation was about K4.3 billion. Then in 2018 it was K6.1 billion and for 2019 it might be worse. It shows you that the PF is unrepentant and it doesn’t care about how monies are going,” Kalaba said.

“80.3 per cent of that money (K6 billion) is through various corrupt activities. But when we say that the PF is corrupt to the core…. We want the PF to start dealing with what Mary Chirwa (FIC director general) is raising in the Financial Intelligence Centre report.”

Kalaba advised the government to seriously deal with financial impropriety highlighted in the FIC report.

“If we do that, it will even give us confidence to go to the donors with audacity. If we don’t deal with what has been raised in the Financial Intelligence Centre report, donors will not take us seriously,” he noted.

He added that corruption in Zambia was growing at a very fast rate and that: “those in authority are not even willing to deal with it head-on.”

“When we come in power as Democratic Party, corrupt activities will be non-bailable so that our country’s glory can be restored. We have played enough politics!” Kalaba assured.

Kalaba recalled that when he resigned as foreign affairs minister in January 2018: “I said I had resigned on the strength of the corrupt activities which were coming out of the PF.”

“There were those who were telling me that ‘bring evidence of corruption.’ But it is coming up and I told people to just wait. These things are still coming out! Even what you have seen, more is still coming out because what goes on in the morning, afternoon and in the evening in the PF is all corruption,” Kalaba said.

Meanwhile, Kalaba wondered whether government officials ever took time to think about what CBU students were doing at home.

Higher education minister Professor Nkandu Luo announced an indefinite closure of the CBU on April 5 following a riot by students on April 3.

The riot, according students, was promoted by a decision by the University management to suspend union leaders.

“What does this government think CBU students, without qualifications, are doing at home? I’m appealing to the President, in his humility, that may he please consider re-opening the Copperbelt University immediately. It’s very important that we get our children to get the education that they need. Let’s look at their plight and the issues they have raised. This must be a give and take situation,” explained Kalaba on I-Wave radio in Chingola on Friday.

“If the University of Zambia was closed for this long, way back, when these leaders were at the institution, how long could it have taken for the to graduate? But national leaders we had then valued education, unlike the current leaders who are only interested in their personal welfare. I’m saying open the Copperbelt University immediately!”