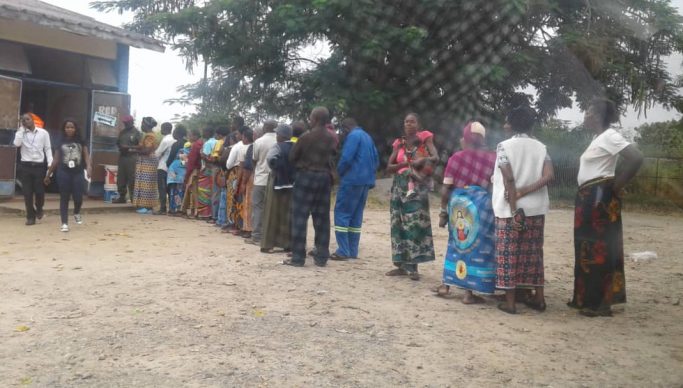 Voter turnout in Bahati constituency and Chilyapa ward of Mansa Central constituency has been low due to the rains which started in the early hours of today.

Zaza said after evaluating the circumstances, time would be compensated to the polling stations that might not have opened on time.

People of Bahati with a total of 43,827 registered voters go to the polls to decide who will represent them in parliament in the remaining two years.

Meanwhile, in Roan constituency voting started on a low note with only 270 having cast their votes out of 1,013 registered voters at Nkulumashiba Primary school Polling Station by 11:00hrs.

At Dambe Twashuka Secondary School Polling station only 155 had voted by 10:00 hrs out of 800 registered voters while at Roan Antelope Secondary school 102 had voted out of 797 registered.

Four candidates are taking part in the Roan Parliamentary by elections who include, Morgan Banda of the UPPZ, Chama Mwansa of PAC, Charles Chishala of National Democratic Congress and Patriotic Front’s Joe Chibuye

The By-elections in Bahati and Roan constituencies have been necessitated following the expulsion of incumbent, Harry Kalaba on January 28, 2019 and the crossing of the floor of Chishimba Kambwili from Patriotic Front (PF) to NDC as declared by the Speaker of the National Assembly on February 27 2019.