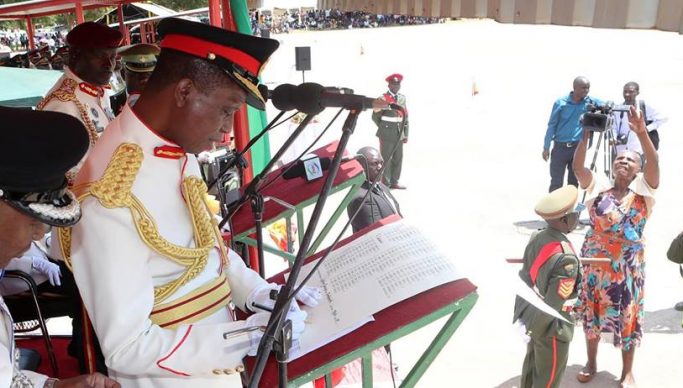 President Edgar Lungu has called on members of the defence forces to exhibit professionalism in the discharge of their duties.

And President Lungu has warned that he would not hesitate to dismiss men and women in uniform with political inclination.

“”Let me now address you specialist officer cadets on parade. This career you have joined demands a lot of discipline; dedication to duty, responding positively to demanding situations and, above all, respect for the rule of law. This military training you underwent marks the beginning of your military career. Thus, you have a huge task ahead of you. Professionalism should always be the guiding principle in your execution of leadership roles,” explained President Lungu. “Similarly, your perseverance, focus and resilience during training should equally be a beacon and an inspiration throughout your career. This will enable you to serve diligently, with integrity and self-sacrifice. As specialists in your respective fields, I challenge you to contribute positively to the professionalism and development of the defence force.”

And President Lungu has warned that he would not hesitate to dismiss men and women in uniform with political inclination.

The Head of State stated that men and women in uniforms were supposed to be nationalistic, patriotic and non-partisan.

“As members of the defence force, the Constitution of Zambia, demands you to be nationalistic, patriotic, professional, disciplined, competent and non-partisan. You have the right to vote, but you cannot be partisan. This entails that you will remain loyal to the President of Republic of Zambia, and the government of the day. There’s no government of the night, unfortunately. . . Because there will only be one government at a time,” said President Lungu. “You will not have any inclination to any political party, pressure groups and members with negative public opinions. Therefore, if anyone you is found wanting in this area, you will be asked to part company with the defence force.”

He further expressed delight at the quick response exhibited by men and women in uniform during time of disasters.

“I now wish to draw your attention to the exemplary conduct that the Zambia Army has displayed in times of the country’s disasters. In this respect, I wish to express government’s satisfaction at your quick response in times of disasters. Recent examples being the recognition the reconstruction of bridges across the country during this rainy season, and the modernisation of selected markers,” he said. “This indeed is how you ought to work as men and women in uniform. You should always be ready to serve the people and the nation at large.”

Sikazwe explained that Zambian troops deployed by the United Nations in the Central African Republic and other countries in the region were performing exceptionally well.

Sikazwe also called for discipline among members of the defence forces.

“Military is a mark of trust and calls for discipline among you men and women in uniforms. It also calls for loyalty to the government of the day, said Sikazwe.

He further said that members of the defence would remain committed to responding positively to disasters and natural calamities.

He thanked the government for improved infrastructure in training institutions.