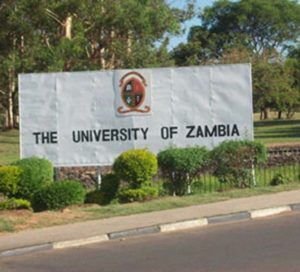 And the Copperbelt University (CBU) president Derrick Ntalasha said the work stoppage which started on Monday would continue because all the workers represented by the three unions had not received their February salaries.

Dr Lampi disclosed this in an interview with newsdayzambia.com this week, under the backdrop of a strike action that besieged the institution since Monday.

Dr Lampi explained that the owed amount has not been settled despite assurances from government that the payment would be made and yet only K69 million was allocated in the yellow book for this year’s government budgetary support.

Minister of Higher Education Prof. Nkandu Luo announced this week that the government had started dismantling its debt obligation to UNZA and other public universities.

However, Dr Lampi says the amount of K23 million Prof Luo was referring to as having started dismantling the debt falls short of the requirements for the higher learning institution to run smoothly.

Dr Lampi said all the unions were on strike and have resolved to stay away from work until the salaries were paid, a phenomenon which they fear may recur every month due to erratic funding to the institution.

Dr Lampi disclosed that the University vice-chancellor Prof Luke Mumba told the union representatives during a meeting on Monday that there was no funding to pay their February salaries as the Ministry of Finance had not released the grant.

Government has been paying civil servants and other public service workers their February salaries in peace-meals in the past two weeks, starting with the soldiers, the intelligence service before moving to other sectors/professions they consider less risk to the security of the country. Universities like most public service institutions are at the bottom of the ladder of priority for funding.

Economist, Chibamba Kanyama last week warned of misplaced priorities and that unless the Zambian government suspends the acquisition of foreign debt, the Central Bank foreign reserves will continue to dwindle.

The PF government has been criticised for embarking on populist policies of infrastructure development projects such as construction and rehabilitation of roads at a very high cost to the people of Zambia who pay taxes.

The roads projects are comparatively more expensive than what is obtaining in the region due to inherent corruption by the Patriotic Front leaders.

Minister of infrastructure development Ronald Chitotela was three weeks ago arrested by the Anti-Corruption Commission on corruption related charges but President Edgar Lungu refused to fire him to pave way for further investigations.

In an interview in Kitwe yesterday, Ntalasha said workers had no means whatsoever of making it to their respective work places or meeting other obligations due to unpaid salaries.

“So far, we have not received the salaries for February and our members have got no means of getting to CBU, which is our work place. So, the work stoppage has continued,’’ Ntalasha said.

The work stoppage started on Monday over the non-payment of February salaries.