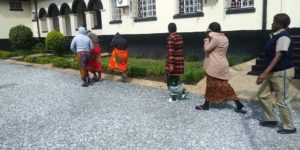 Ndola Chief Resident Magistrate John Mbuzi has issued a warrant of arrest against a woman of Ndola who was indecently assaulted and abducted by five women for allegedly having an affair with a married man.

This is in a matter where the five, Precious Kapambwe, 25, Bridget Chisha, 21, Maureen Mutale, 29, Margret Mwansa, 25, and Catherine Banda, 29 jointly and whilst acting together are charged with an offence of abduction contrary to the laws of Zambia.

In count two, the five are charged with an offence of indecent assault.

Particulars of the offence are that the five, on December 1, 2018 did abduct the victim with intent to put her in danger and did subject her to bodily harm.

When the matter came up for continued trial, the state informed the court that complainant in the case had disappeared in unclear circumstances.

The move prompted Chief Resident Magistrate John Mbuzi to issue a warrant of arrest against the complainant returnable January 21, 2019.

The matter has since been adjourned to January 21, 2019 for continued trial.