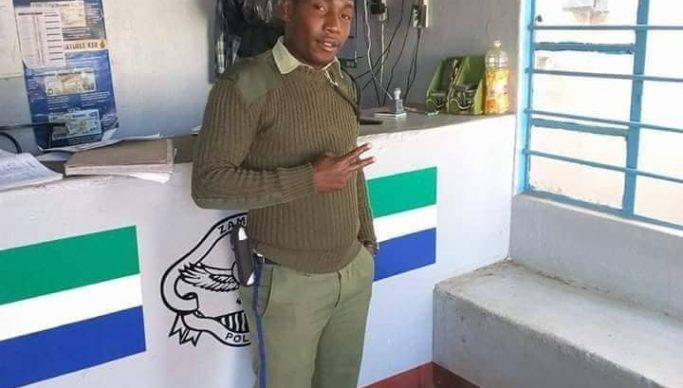 POLICE investigations in the Munali police shootout that led to the death of an officer was as a result of differences in the approach to a debt recovery approach by the assailant.

Constable Edwin Kabasiya did not agree with Constable Lennox Kapila on his advice that the former’s wife sought litigation against the television repairer who owed them money for a television set.

Kapila had asked the wife of constable Kabasiya to take a television repairer who owed them money to court, but this did not sit well with Kabasiya as he wanted the TV repairer to be taught a lesson.
Police Spokesperson Esther Katongo said brief facts concerning Kapila’s shooting according to eye witnesses were that the suspect Kabasiya and wife had a television set which needed to be repaired and later be sold.
Katongo said the television set was taken to a named technician (tv repairer) within Kaunda Square and after some days, the technician paid a deposit of K500 remaining with a balance.
“However, on January 4, 2019 at around 20:00 hours, the wife to Kabasiya went to Munali Police Post to have the technician arrested because it had taken some time  for him to pay the balance.
“She found Kapila on duty who advised her to take civil litigation because the matter was civil, but the woman insisted that the technician be arrested.  Kapila stood his ground and Kabasiya’s wife left. A few minutes later, Constable Kabasiya appeared at Munali Police Post in uniform armed with an AK47 rifle,” she said.
Katongo said he wanted to confirm if the technician was detained and he proceeded to check in the cells and in the Arrest and Prisoner’s Property Book (APPB) and he did not find the name of the technician.
She said then Kabasiya went outside where Kapila was standing and started pestering him about the whereabouts of the technician, but Kapila told him that they had not arrested him.
“Kabasiya insisted and started threatening Kapila that he was going to shoot him and he later fired the gun. The suspect is still on the run and a manhunt has continued,” she said.
Constable Kapila of Munali police post was shot by Constable Edwin Kabasiya of Meanwood Kwamwena around 21:00 hours on Friday last week and died yesterday around 09:00 hours at the Levy Mwanawasa Teaching Hospital.
Kampyongo told Journalists yesterday that government would thoroughly investigate the matter to determine what led to the shooting and ensure that justice prevailed.
Constable Kabasiya is reported to have gone to Munali police post where he picked up a quarrel with Constable Kapila and later shot him in the stomach with an AK 47 rifle.
Meanwhile, a police officer, two members of the neighborhood watch and one reservist have been detained at Matero Police Station in connection with the death of a suspect in a burglary and theft case.
The suspect identified as Jimmy Sampa was picked on January 5, for allegedly stealing a radio and two speakers before he died at George police post at about 07 00 hours the same day.
Katongo identified those arrested as Constable Habatebele who was in charge of the shift, reserve Constable Phiri and two neighborhood watch officers Joseph Banda aged 49 and Saulosi Phiri aged 35 all of George Compound police post.
Katongo who confirmed the development to the media said the body of the deceased was in the University Teaching Hospital mortuary awaiting postmortem.
She said the docket had been opened while investigations continued in the matter.