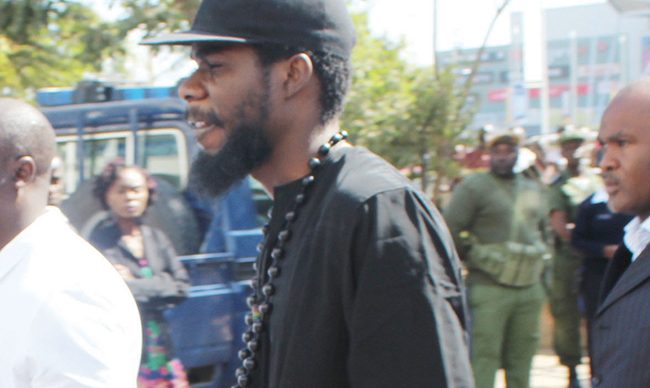 CIVIL rights activist Chama Fumba, popularly known as Pilato says he is ready to hand in himself to the police following an international warrant issued by the Zambian government.

The Zambian government this week issued an international warrant of arrest against Fumba who fled the country following insistent threats on his life by ruling Patriotic Front officials.

Pilato said the slave must be willing to pay the highest price for his freedom because those that enslave him may not be willing to let him go for free and this is what led to the political liberation of the country.

“I will wait for the Interpol to arrest me this week and next week…. If they don’t I will walk into the nearest police station here or even travel back to Zambia to be arrested. I am willing and ready to be arrested by the police and not the thugs,” said pilato

Pilato was together with another activist Laura Miti and opposition Patriots for Economic Progress leader Sean Tembo were last year arrested for disobeying lawful orders contrary to section 127 of the Penal Code chapter 87 of the laws of Zambia when they protested against the purchase of controversial Fire Tenders.

Particulars of the offence are that the accused on September 29, 2017 jointly and whilst acting together with other persons did disobey a lawful order to stop demonstrating at the national assembly.

When the matter came up, the arresting officer informed the court that the bench warrant has not been executed as Chama Fumba was out of jurisdiction.

Lusaka Magistrate Mwaka Mikalile was informed that Interpol and the immigration department have been engaged to help with the matter.

However, on his Facebook page, Pilato said he understood the repurcations of standing up to repression and challenging the status quo.

“The first day I started this journey I knew it wouldn’t be an easy one. I knew it was a journey in the wilderness. I perfectly understand that my own freedom of expression is my responsibility to stand by my own actions and words. This responsibility means that I should be able to face the law whenever required both the just laws and the unjust ones as long as they are agreed upon,” said Pilato.

“This is not a path I chose with my guts but one that was chosen with very strong convictions of a socially just society. I do not believe that inequality and social injustice can overcome itself, this is something that those that believe in the ideas of a socially just society must fight for. I protested and I will protest again as long as the masses of our people remain deprived of a decent livelihood. There’s no justification why the president and his pets can be getting rich every day while the majority of our population keep drowning in the bottomless pit of poverty”.

He said he would again protest and demand for accountability as long as the people remained under-served.