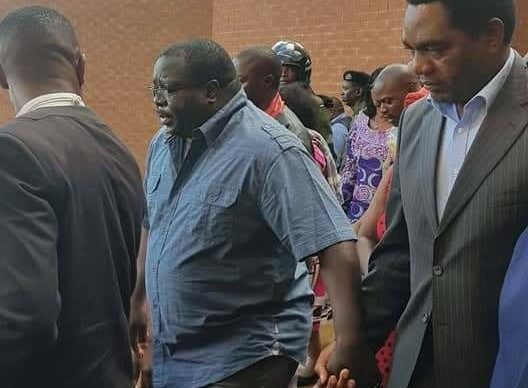 Anti Corruption Commission (ACC) officers on Tuesday deliberately stayed away from the magistrates’ court where Kambwili appeared this morning so that he could get bail.

When Kambwili was discharged from Care For Business medical centre earlier in the day, he was rushed to Woodlands police station where police prepared to lock him up, despite his visibly frail condition.

When his legal team arranged that he appeared before court, ACC prosecutors stayed away.

Later in the afternoon, the magistrate refused to grant him bail because prosecutors were not there.

Kambwili was later taken back to Woodlands police station where he was promised bond.

But after constant communication with their superiors, police and ACC officers informed Kambwili that he was no longer in their hands, but in the court’s hands, so they had no powers to grant him police bond.

By 16:30 hours, Kambwili was still at Woodlands police station with his legal team.

Meanwhile, there was drama at Lusaka’s CFB Hospital earlier on when Kambwili was discharged from the private-owned health facility amidst heavy police presence.

Kambwili has been in admission at CFB since Friday last week when he developed high blood pressure while in custody at Woodlands police station.

At about 12:17 hours, he was whisked out of the hospital using the backdoor.

And strategically positioned outside the hospital, at the gate on Lubu Road, was a horde of riot police officers that were waiting for him in more than three police vehicles, which had earlier been parked at nearby Northmead Police Post in readiness for the operation.

As the vehicle carrying the opposition NDC consultant drove out, a senior police officer signaled to his colleagues and showed them the blue Mercedes Benz.

There was near commotion as Kambwili’s security team ensured his safety.

He was later driven to Woodlands police station, a move that incensed his supporters.

The action annoyed several onlookers who wondered why police had to use live ammunition.

A male passerby shouted: “Nanga mufunotipaya? Pali nkondo pano? (Do you want to kill us? Is there war around here?” he asked.