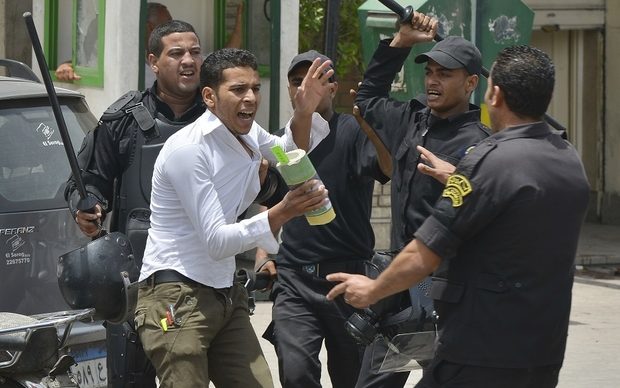 Egyptian authorities carried out a series of arbitrary arrests in late January and February, 2018, in an escalating crackdown against political opposition, Human Rights Watch said on Monday.
Among those arrested is Abd al-Moniem Abu al-Fotouh, a 2012 presidential candidate and the head of the Strong Egypt Party.
The intensifying repression and the use of terrorism-related charges against peaceful activists are emblematic of a government strategy to silence critical voices ahead of the planned presidential elections on March 26-28.
Human Rights Watch and 13 other rights organisations have said that they lacked ‘the minimum requirements for free and fair elections.’
“Abu al-Fotouh’s arrest underlines the government message that criticising President al-Sisi in the lead-up to the presidential elections is forbidden,” said Sarah Leah Whitson, Middle East and North Africa director at Human Rights Watch.
“Elections should stimulate political debate and reflect the popular will, but al-Sisi’s government wants to ensure with its heavy-handed repression that this is not the case in Egypt.”
Following his arrest, a court placed Abu al-Fotouh and 15 members of his party on the country’s terrorism list based on flawed laws, without hearings or due process, for alleged contacts with the outlawed Muslim Brotherhood.
“The Egyptian authorities should annul these arbitrary terrorist designations and immediately release Abu al-Fotouh and all those arrested solely for expressing criticism or participating in peaceful activism,” Human Rights Watch demanded.
Authorities also arrested Mohamed al-Qassas, the Strong Egypt Party’s deputy president; Mohamed Abd al-Latif Talaat, secretary-general of the centrist Al-Wasat Party; and Hesham Geneina, former head of the Central Auditing Agency; all remain in detention.
On February 14, security forces raided a party meeting at Abu al-Fotouh’s house in a Cairo suburb, arresting him and six other party leaders, who were subsequently released.
The Interior Ministry said in a February 15 statement that they arrested Abu al-Fotouh with the Supreme State Security Prosecution’s ‘permission’ based on ‘information’ from the ministry’s National Security Agency claiming that he held secret meetings with Brotherhood members in London and gave media interviews as part of a plot for ‘stirring chaos and instability.’
The statement also alleged that police confiscated documents with “assignments” for Abu al-Fotouh, including on ‘how to mobilise crowds’ and ‘bringing down the political and legal state’s legitimacy.’
Abu al-Fotouh’s lawyers and family said in separate statements that the police did not show any search or arrest warrants when they raided his house.
Abu al-Fotouh’s son Houzaifa told Human Rights Watch that the family had “a sharp conversation” with the police because they refused to allow police to search the house without a warrant. He said that the police, including National Security agents, left without confiscating anything.
Abu al-Fotouh, 66, was arrested a few hours after he returned from London, where he gave interviews to Al Jazeera, BBC Arabic, and Al Araby TV,  in which he criticised al-Sisi and called for boycotting the presidential elections due to the ‘absence of competition.’
State Security prosecutors held him for 15 days in Cairo’s Tora Prison complex, pending investigations of accusations that included ‘spreading false news’ and ‘leading an outlawed group.’
Abu al-Fetouh, was transferred to a hospital at least once during interrogations.
The Interior Ministry released a statement on February 21 saying it had arrested six wanted Muslim Brotherhood members possessing three rifles on a farm belonging to Abu al-Fotouh in Beheira governorate.
His family told Human Rights Watch that he does not own a farm and that while his wife owns land in Beheira, the family had rented it out since 2013.
The family also said they knew nothing about the six people the ministry identified.
State Security prosecutors used the same accusations to place al-Qassas in pretrial detention following his February 9 arrest.
Talaat was arrested at his home on January 22 on charges of ‘inciting chaos’ and prosecutors extended his detention since then. /Reuters