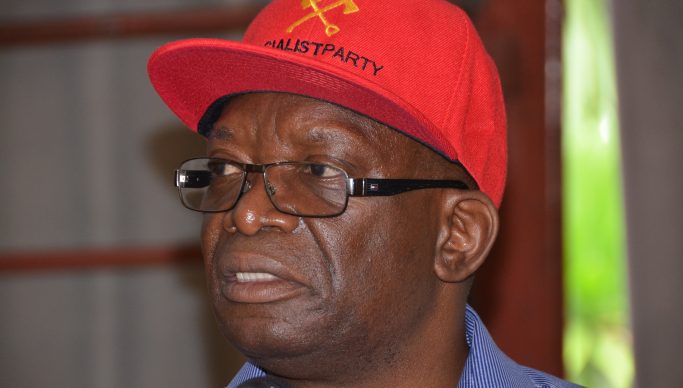 THE Socialist Party says it has every right to recruit members from all Zambians, regardless of where they are found.

Responding to a story in today’s edition of the Daily Nation newspaper where the party, among other things, is being accused of training its members how to make and detonate petrol bombs, General Secretary Dr Cosmas Musumali said the article was a total fabrication and should be treated with the contempt it deserved.

“The party takes strong exception at the Daily Nation article in its vol. no 4 issue 1881 Monday edition of 29th January on the insinuations which are laced with malice and non factual comments. As a political party, we have the right, like any other political formation in Zambia, to reach out to the Zambian people irrespective where they are found and what they are in society through our mobilisation teams,” Dr Musmulai said in a statement.

“Our operating principles are strongly influenced by socialist values of Equity, Humility, Honest and International Solidarity and we interact with the Zambian people through Justice, Equity and Peace (JEP) as our programme. It is erroneous therefore from the article to suggest that the party is mobilising people on how to make and demobilise bombs!”

He stated that the party was not operating illegally and its activities should not be criminalised for political reasons.

Dr Musumali stated that ideological foundations on which the party stood were very clear and have been explained to all members.

“Socialist Party of Zambia is a legally registered party under the Zambian laws. The Party went through over a year of rigorous security check or scrutiny before been handed down the certificate of registration,” he stated.

“As a party, we hide nothing that we are a socialist political party formation rooted in the working class ideology of Marxism-Leninism as enriched by Mao Zedong, Kwameh Nkrumah, Almicar Cabral, Patrice Lumumba, Frantz Fanon, Ernesto Che Guevara, Ho Chimingh, Samora Machel, Thomas Sankara,     Chris Hani, Joe Slovo, Fidel Castro and many other revolutionaries.  SP believes in the masses of our people being their own liberators. And this calls for education to raise their level of consciousness.”

He stated that intentions of the Socialist party were very clear, which focused more on promoting justice, equity and peace among all citizens.

“The manifesto of the party makes it clear on our deliberate and calculated intentions in promoting peace. We make no apology over the party spreading its teachings to the poor in any place where they are found across the width and breadth of our country because we are constructed as a workers and poor people’s party and these must own it.