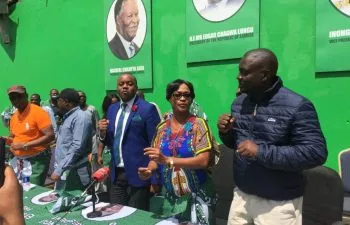 By Staff Reporter
OPPOSITION FDD spokesperson and deputy secretary general Antonio Mwanza is expected to leave the party today and join the ruling Patriotic Front (PF).
The outspoken Forum for Democracy and Development senior member was before the 2016 general election a serious critic of the PF.
But prior to that election, both himself and his party leader Edith Nawakwi started attacking a fellow opposition party, the UPND.
Since then, the FDD has taken a soft stance on the ruling party, leading to public speculation that the two parties had colluded.
According to a notice from Lusaka Province PF information and publicity secretary Christopher Shakafuswa, Mwanza would be received by the party’s deputy secretary general Mumbi Phiri.
‘The Deputy SG Hon. Mumbi Phiri will be receiving Mr. Antonio Mwanza FDD Party  Spokesperson who is defecting to the Patriotic Front Party  today at 09:30 hours at the Party Secretariat.
Youu are Notified accordingly.
Christopher Shakafuswa
_IPS
Lusaka Province,” stated Shakafuswa.
Yesterday, Mwanza left some of his followers in suspense, while others had a clue when he posted on his Facebook page that he had done his part.
“It is finished!
I have done my part.
I have put my heart and my soul in this thing and my conscience is clear. And iam sure that any honest human being will be proud of my contributions but i guess it’s time to go. It’s time for new challenges, new thinking and a new dawn.
Aluta Continua!!!!” posted Mwanza.

Corruption is beyond individuals – Musumali

No politics at Kuomboka – BRE

Time up for Lungu, says Musenge

Real Struggle Should be Waged Against Real Enemies, Dr M’membe

Sinkamba Pokes UPND and LAZ to enforce Judgement on Ministers

UPND Could be Worse than PF, warns Chipimo

Dr M’membe’s does not need cleaning, he is straightforward, says Dr Musumali

M’membe will be President of Socialist Zambia in 2021, declares SP

We are not politicians, but Revolutionaries, declares Dr M’membe

Time for M’membe to take a backstage is gone – Musumali

Socialist Party will shock the world in 2021 – Dr Musumali

Impeachment is about defending Constitution – HH

NDC to participate in parliamentary by-elections

No foreigner is funding us – NDC

PF Most Corrupt in the History of Zambia, Dr Musumali

There was no death in Sinda violence, say police

HH Congrats Ramaphosa for his Election

UPND to proceed with card renewal in E/Province

Lungu has Affirmed His Corruption, HH.

PF Threatens to Incarcerate HH Until his death

NDC will split votes to benefit UPND in 2021, predicts EIU

Kambwili refuses to be intimidated

Vatican envoy pleads for international support to refugees in Zambia

ConCourt has power to determine any constitutional matter – Sinkamba

UPND Aware of Dubious Dealings in Procurement of Oil

Africans Must Not Lose the Spirit of Pan Africanism – Rupiah

FDD Call for Resumption of Live Coverage of PAC meetings

East PS, mayor in war of words over demolitions

Six per cent pay rise for miners a mockery – Musenge

East chief warns of hunger due to drought

Zambia Drought Could Slash 2018 Maize Output by Around 50 percent

PF is no Longer Attractive – Kambwili

NUMSA says DRC President Kabila has no Legitimacy to Govern

PAC Presses for Full Disclosure Over the Sale of Mukula Logs

MISA Zambia Disappointed with Harassment of Reporter by ZAF Officers

Government Should Have Planned Relocating of Vendors – Siabutuba

MISA Zambia Disappointed with Harassment of Reporter by ZAF Officers

COBUSU Opposed to the Reopening of University