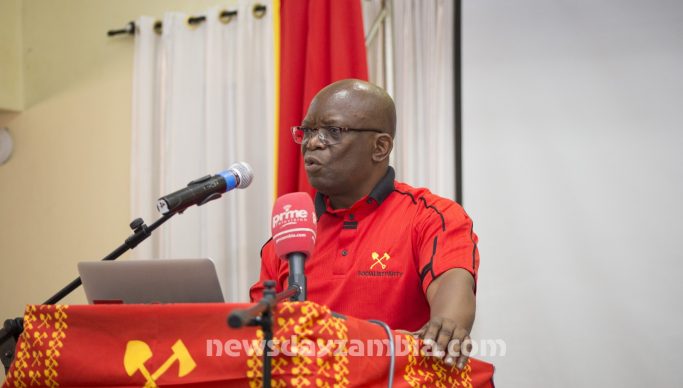 THE Socialist Party is not about defeat, compromise and surrendering to capitalism, party general secretary Dr Cosmas Musumali has vowed.

And Dr Musumali said all the lies and scandalous acts prevailing in Zambia today will be swept away by Dr Fred M’membe, the party’s 2021 presidential candidate, once he becomes Republican President.

Meanwhile, over 500 local and international delegates attending the party congress heard Dr Musumali say the ruling PF party was using climate change as an excuse for the failures of capitalism.

Opening the First National Congress of the Socialist Party at Lusaka’s Dream Valley Resort on Friday morning, Dr Musumali said socialism was winning as the days of capitalism were over.

“You can enslave people for 500 years but you can’t enslave them forever,” he said amidst a thunder of applause and whistling.

He said capitalism was brought to Africa by the colonialists who not only stole the Africa’s wealth but also took away their brains and cultural identity.

Dr Musumali told the gathering that the spirit of resistance which was started by Ngoni prince, Nsingu, who was executed together with 10,000 young Ngonis in 1898 by Cecil Rhodes’ occupying forces, for resisting the theft of their land, was a point of reference for the Socialist Party.

Dr Musumali said the Socialist Party was here to win back the wealth stolen by the colonialists and pointed out that political parties that were pursuing neo liberal agendas in Zambia were reversing the gains of the struggle for independence.

He said if anyone asked a Zambian who was in control of the country, it would be wrong to point to the Patriotic Front as the bourgeoisie were in charge.

“It is capitalism that controls power in Zambia,” he said amidst loud acclamations. “You can bring UPND today, you can bring NDC tomorrow- these are all bourgeoisie parties.”

Dr Musumali said it would be folly to think that the Zambian masses’ lives were going to get any better under the capitalist-inclined political parties.

Dr Musumali told the capacity-filled hall that the poverty of Zambia was not about the bad policies of respective individuals.

“The poverty of Zambia, which is one of the worst in the whole world, is because of the failures of capitalism,” he said. “The poverty we are talking about is the poverty of the masses.”

And Dr Musumali said for the ruling PF, climate change has become an excuse for the failures of capitalism.

“What is failing is capitalism. It is failing not to deliver to the rich but it is failing to deliver to you,” he said. “That is where your party comes in. Your party says we stand for the poor. For the first time in Zambian history, the workers, the poor have their own party.”

He said the Socialist Party’s first national congress was about the poor themselves charting their way forward.

“Getting state power is not difficult. I have every hope that your party, being the fastest growing party in Zambia today, come 2021 you will get state power.”

“I have travelled a long journey with this comrade here. If there are people who know him, I am one of them,” said Dr Musumali as the acclamations subsided. “I am yet to meet a Zambian who has fought so hard and sacrificed so much and loves Zambia like Fred M’membe.”

He said Dr M’membe despite suffering verbal and physical harassment from some people, who even took all the material possessions from him, remains undeterred in his resolve, he made as a young boy of 19, to make Zambia a better place for all.

“He is standing here today,” said Dr Musumali as more applause followed his sentiments. “The lies, the scandals that are in Zambia today are going to be swept away by a President called Fred M’membe.”

Dr Musumali said if anyone was looking for a Zambian with roots in Zambia, Dr M’membe was one of them.

“The spirit of fighting dispossession has been with us. We are still fighting. Don’t think they have gone.  They gave us nominal political independence but don’t own our resources,” he said. “We are more or less renting in a place we call our country, our continent.”

“This congress is just the beginning,” said Dr Musumali. “When you start attracting people that would have given up on politics, you are winning.”

Dr Musumali expressed confidence that the opposition party would win the 2021 elections.

“People that said politics is dirty, it’s not giving us anything and it’s just lies, but we see them coming, wanting to work with us. This congress is the beginning, comrades we are winning,” he said.

And Dr Musumali has expressed concern over the continued load shedding the country was experiencing.

“The load shedding is now going for ten hours and this affected the poor Zambians whose foods has gone to waste,” he said.
He noted that climate change had suddenly become an excuse for those in leadership.

“Climate change is not new, even in 1970s, in 1980s there was climate change, what is failing is capitalism, its failing to deliver to the masses,” he said.

Dr Musumali wondered why the PF leadership was insistant that there was no hunger in the country when people were going without food.

“People from some parts of the country are starving, the President is on record that no Zambian is going to suffer. When people start eating roots the leadership says no one is starving,” he said.

“There is nothing the Zambian masses are benefiting from this government and all they have managed to do is continue confusing the masses,” he said.

The Socialist Party national congress runs from Friday to Sunday.