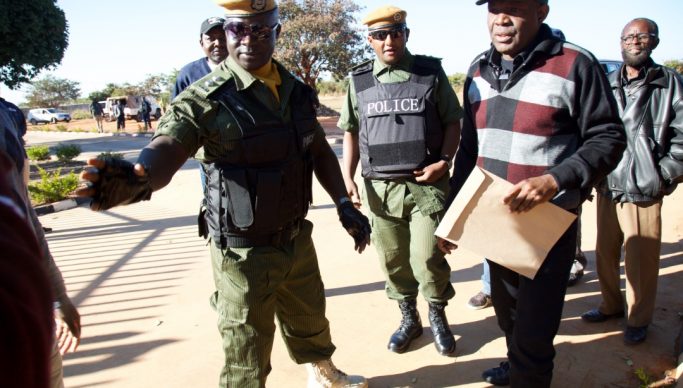 The provisional liquidation of the Post doesn’t mean the death of Fred M’membe, the Socialist Party 2021 Presidential candidate said after a seven-hour long interrogation at Muchinga Province Police Headquarters yesterday.

And Muchinga Police commissioner Joel Njase has praised the Socialist Party and Dr M’membe for not taking along disruptive supporters to the police station during the latter’s interview.

When Dr M’membe entered the police station at about 08:25, one of the officers, Oscar Phiri, availed him a statement of complaint by Post provisional liquidator Lewis Mosho.

The complaint states that police were making inquiries in the offence of possession of property suspected to be proceeds of crime contrary to section 71 (1), a, b,c (2), (3) of the forfeiture of proceeds of crime Act Number 19 of the laws of Zambia.

“It is alleged that Dr Fred M’membe on unknown dates but between the year 2012 and June 19, 2019 acquired land and build structures in Mwika Village, sub-chief Mwaba Nkulungwe, chief Nkula’s area in Shiwang’andu district of the Muchinga Province of the Republic of Zambia.”

Dr M’membe was then asked if he understood the allegations levelled against him.

“You’re further warned and cautioned that you’re not obliged to say anything in answer to these allegations unless you wish to do so. But whatever you say shall be taken down in writing and may be used in evidence in the courts of law,” Mosho told Dr M’membe through the police . “You’re also reminded that you have a constitutional right to legal representation.”

“Unless, they kill me physically I will still be here smiling, laughing. I came into this world with nothing and I will leave with nothing. As long as I live and in good health, I will be able to feed myself,” Dr M’membe said. “This year, I produced maize at Mwika; a huge harvest which nobody in the entire history of Nkulungwe has ever produced.”

He said they wanted him to die.

“They wanted me to die. They took away my investments of 25 years. I’m in Mwika village not because I have nowhere else’s to go; I am there because that’s the land of my birth. The land my ancestors left me with, collectively with my relatives. It is not land curved for me by some benevolent sub-chief,” Dr M’membe continued. “I went to Lusaka after finishing my form Five at St Francis Secondary School, Malole, P.0. Box 49 Kasama, Northern Province of the Republic of Zambia in 1976. I went to Lusaka to attend the University of Zambia. After that I started work in Lusaka.”

Dr M’membe said he went to Lusaka from Mwika alone.

“But today I return with a big family comprising of a wife, children and grandchildren. In Lusaka, I am simply a guest of Chief Nkomeshya who has been very kind to give us some land to build on and even settle there. But Mwika Royal village is my home and nobody will take me out of that,” he said. “My plea to you officers is that search your conscience; do the right thing regardless of the consequences. And the right thing is to vacate my house. Treat me fairly, respect my human rights and my rights as a human being.”

He said he was not asking for any favours.

“I ask for no favours from you but please, please do the right thing by vacating my house. Here I am being expected to legitimise an illegality and an unlawful act. The Police are not there to protect some of us; only God is there for us. If not stopped, the bell tolling on me today will toll on you tomorrow,” Dr M’membe spoke further.
“My response to Mr Mosho’s complaint is that I have not committed any crime and I have not procured any form of proceeds of crime as complained. And any honest investigation will prove that. This is simply a political ploy by Mr Mosho and his political masters to try and curtail my political work for 2021.
Armed police officers cordoned off Muchinga Division headquarters in Chinsali to stop people from accessing the police station as Dr M’membe was being interviewed.

Dr M’membe was recently issued with a call out to report to Chinsali Police in connection with a house he built in his Mwika village in Shiwang’andu district.

Muchinga Police Division issued the call out to Dr M’membe via Police Headquarters in Lusaka where he was summoned to appear last Thursday.

Dr M’membe arrived at the Muchinga Police Division in the provincial headquarters, Chinsali, at 08:15hrs and the interview lasted for over seven hours.

Police recorded a warn and caution statement from Dr M’membe at 14:25 hours.

And Njase praised Dr M’membe and the Socialist Party for cooperating with the police.

“I just wish to commend Socialist Party for not coming with disruptive supporters. I have seen a few outside and they are well-behaved. Thank you very much for cooperating,” said Njase who was not part of the interrogating team.

Dr M’membe was ushered inside with only two-party officials while the rest of his delegation were ordered not to come out of their motor vehicles.

However, the situation was very calm and quiet, especially that the Socialist Party general secretary Dr Cosmas Musumali on Monday directed scores of party members and sympathizers to stay away from the police station as Dr M’membe was being interviewed.

Nonetheless, while Dr M’membe was inside, police officers manning the entrance to the police station chased whoever they saw walking about on the main road or standing 100 metres from the station.

Party officials who accompanied Dr M’membe to the station were told to sit in their cars, saying those were instructions from their superiors.

On June 22 police officers staged an attack at Dr M’membe’s village in Nkulungwe area of Shiwang’andu district, chased the workers, vandalised ornaments, cooked and ate the food before occupying the house.

As this was happening when Dr M’membe was addressing a Socialist Party maiden public rally at Nsansa Grounds in Kitwe’s Race Course compound.

Subsequently, Shiwang’andu PF member of parliament and home affairs minister Stephen Kampyongo, boasted during a meeting at Longe village in the constituency that, “we have chopped off M’membe’s head”.

Kampyongo pledged to ensure that Dr M’membe did not step in his village, Mwika, and that the house police were occupying would be turned into a hospital