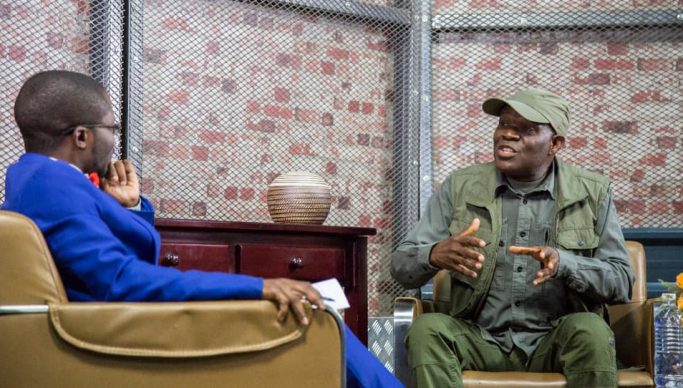 Socialist Party 2021 presidential candidate Dr Fred M’membe on Wednesday evening discussed the vision for the party in office beyond 2021.

In an interview with Muvi TV’s Innocent Phiri, Dr M’membe outlined the vision on a number of issues, which range from mining, agriculture, media and development.

“We have no choice but to start producing agriculture equipment. Those factories will employ all sorts of people. We need to engage in agro processing,” he said.

He said the Socialist Party was not just mobilizing people to vote, but also to plan for the governance of the country.

And Dr M’membe has assured that the Socialist Party would not nationalize the mines due to sensitivity and complexity of the industry.

“We are not going to nationalize the mines, it’s a complicated industry right now. We don’t have enough mining engineers, mineral scientists, we don’t even have mining economists in this country,” he said.

“We may just have to leave mines the way they are owned, and ensure that we collect fair taxes and pump those taxes in peasant agriculture, education and health”.

He explained that two thirds of the minerals deposits remained unexploited.

“Moreover, only one third of our mining potential is exploited, we still have two thirds to exploit. What we may need to do is what Chile did – they started sending more and more young people to study in the best universities on mining issues,” Dr M’membe said.

He said mining companies should be able fund such a government policy.

“Once we have developed enough capacity we can start exploiting the two thirds that is not yet exploited either with new or more beneficial joint ventures with others.”

He said Zambia’s situation required a complete shift in policy how to deal with mining issues.

“The mining industry is not so beneficial, but of course it’s not only copper that is there as a mineral in this country, we have other minerals that are cheaper to mine like manganese. We can form cooperatives to mine those, the state support in terms of capital, technology and marketing. So we will deal with mining in a different way,” he said.

Corruption is beyond individuals – Musumali

No politics at Kuomboka – BRE

Time up for Lungu, says Musenge

Real Struggle Should be Waged Against Real Enemies, Dr M’membe

Sinkamba Pokes UPND and LAZ to enforce Judgement on Ministers

UPND Could be Worse than PF, warns Chipimo

Dr M’membe’s does not need cleaning, he is straightforward, says Dr Musumali

M’membe will be President of Socialist Zambia in 2021, declares SP

We are not politicians, but Revolutionaries, declares Dr M’membe

Time for M’membe to take a backstage is gone – Musumali

Socialist Party will shock the world in 2021 – Dr Musumali

Impeachment is about defending Constitution – HH

NDC to participate in parliamentary by-elections

No foreigner is funding us – NDC

PF Most Corrupt in the History of Zambia, Dr Musumali

There was no death in Sinda violence, say police

HH Congrats Ramaphosa for his Election

UPND to proceed with card renewal in E/Province

Lungu has Affirmed His Corruption, HH.

PF Threatens to Incarcerate HH Until his death

NDC will split votes to benefit UPND in 2021, predicts EIU

Kambwili refuses to be intimidated

ConCourt has power to determine any constitutional matter – Sinkamba

UPND Aware of Dubious Dealings in Procurement of Oil

Africans Must Not Lose the Spirit of Pan Africanism – Rupiah

FDD Call for Resumption of Live Coverage of PAC meetings

East PS, mayor in war of words over demolitions

Six per cent pay rise for miners a mockery – Musenge

PF is no Longer Attractive – Kambwili

NUMSA says DRC President Kabila has no Legitimacy to Govern

NDC is NOT a Bemba political party”, Dr. Kambwili.

Kalaba won’t give up parliamentary seat

Now Mosho takes his ‘muscle’ on the Chief Justice

Lungu Has Lost Moral Right to Continue in Office – Sinkamba

Lungu Should Resign for Incompetence – Mucheleka

Weah asks opponent to nominate candidates for appointment in his govt …. the president elect has also promised to fight corruption

2018 Will Be the Year of Liberation in Honduras – Zelaya

Election Without Lula is Fraud – Noam Chomsky and Chico Buarque

Lucky not so lucky ….. his dismissal was inevitable – Sinkamba

Edgar Lungu boots out Lucky Mulusa from the PF government

2017 has been a stressful year for most Zambians – HH

Its been a successful year for Foreign Affairs – Kalaba

Botswana challenges US over Jerusalem threats

HH returns to Mongu, thanks the westerners

Putin to Run asIndependent in 2018 Election

Central MMD pleads with Kambwili not to destabilise their party

I don’t posses physical power to defend myself, Pilato

Fr Luonde calls for an end to police brutality against students

Lungu can’t fight corruption, he is of corruption – Kambwili

Zulu threatens to resign as MP