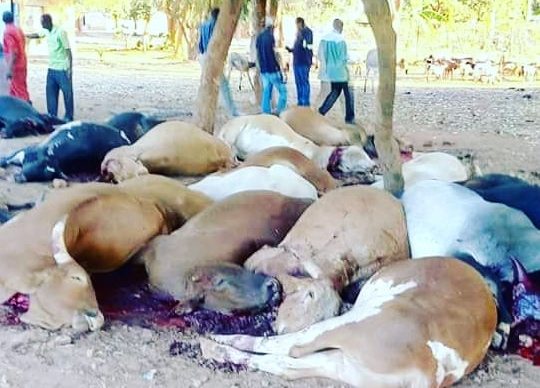 Centre for Trade Policy and Development (CTPD) has expressed concern the manner in which cattle belonging to a Pemba farmer  were slaughtered and auctioned.

In a statement, CTPD Executive Director Isaac Mwaipopo said the organization was particularly disturbed with reports of eight carcasses that were reportedly missing from the original number of animals that were slaughtered.

“While we have heard that the said animals were burnt and that the vet officials did not need any permission or consent from the farmer to take the action they did, we are of the view that in the interest of transparency and accountability, this action should have been done in an open manner. The slaughter of the animals was a public thing which was all over the media and so should have been all other actions that followed,” he said.

“Another thing we wish to express concerns on is the prolonged ban of the movement of livestock. While we appreciate the efforts that the government has put in place to contain the spread of the Foot and Mouth Disease, we should also not be oblivious to the fact that the livelihood of most of the farmers in the two areas largely depends on agriculture visa-vis crop farming and livestock farming”.

Mwaipopo said Zambia was expecting very low yields from the southern half of the country and that government would be overwhelmed to provide relief food.

“Against this background, it is our considered view that the only window of hope for the farmers in the two affected provinces lies in their ability to maximize revenue generation from their livestock. As such a prolonged ban on the movement of their only viable source of income is suicidal not just for the farmers affected but for the government too,” he said.

“As CTPD, we would like to call upon the Ministry of Livestock and Fisheries to step up and address the problem in Southern and Eastern Province with the urgency that it deserves. If left unchecked it may escalate into a national crisis.”

Mwaipopo said the cases of smuggling animals by some farmers could be prevented by a more proactive approach on the part of the government.

“We would also like to urge our government to invest more money in the veterinary departments of our country. Animal health and welfare requires substantial investments. We have observed with sadness that we tend to be very reactive every time a crisis befalls us as opposed to being proactive. We know as a country that we are so prone to tick borne diseases,” he said.