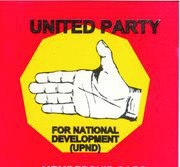 THE UPND national youth wing has warned of going to the streets if grand corruption among PF government senior officials remain unabated.

UPND national youth chairperson Munji Habeenzu charged that Zambians: “are tired of the nonsense that is being exhibited by PF leaders!”

Habeenzu served as Chikankata UPND member of parliament between 2006 and 2011.

“They (PF government officials) are just abusing powers because they don’t know how to win an election legitimately. They got in there by fluke! So, I’m sending a message to those people who are involved in this kind of dirt in the FIC (Financial Intelligence Centre) report….” Habeenzu said at a press briefing in Lusaka on Friday.

“Zambians are suffering out there but others are amassing wealth through corruption! To the corrupt in this government, I’m saying time for reckoning is coming very soon. The PF must stop this stinking corruption. Corrupt ministers are walking freely and the government is busy blindfolding us…. We warn the PF government that if they (government officials) continue doing this kind of dirt thing, we are ready to go on the streets.”

He further asked the PF membership to behave well in the forthcoming Katuba parliamentary by-elections campaigns.

“Let’s go to Katuba and campaign peacefully so that those that will have a proper message will carry the day. We don’t want violence! But if you come in a violent manner, we’ll meet you,” noted Habeenzu.