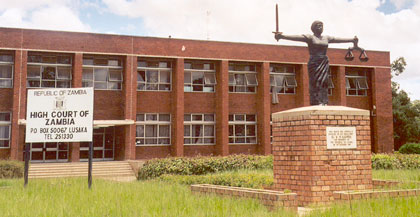 THE Lusaka High Court has found murder-accused Nshinka Kaputo with a case to answer in a matter in which he allegedly shot dead his girlfriend Precious Mangesana in October 2017.

Judge Catherine Lombe Phiri also found Kaputo with a case to answer on a charge of causing grievous bodily harm on his three-year-old daughter.

Allegations are that Kaputo, 35, a businessman of Lusaka’s Meanwood area shot dead Mangesana who was a Multi-Choice employee and also shot his daughter in the neck, an act intended to cause grievous bodily harm.

Ruling on whether Kaputo had a case to answer or not, judge Phiri said information on record was that there was sufficient evidence that the accused was found with a gun in his hands and spare magazines.

“I therefore, find him with a case to answer in this charge,” she said. “On the second count, it is understood that the child was found with a gunshot wound in the neck. This is a serious offence meant to cause grievous wound on a person. I find Nshinka Kaputo with a case to answer on both counts and place him on his defence.”

Earlier, the State submitted that it was a fact that Kaputo was at the scene of crime at the time of the shooting and that he was found with a firearm which was confirmed to have been the one used to shoot Mangesana and the child in the neck.

The State submitted that not only was Kaputo found with the firearm but he was also found with spare bullets.

The State also submitted that from the evidence so far, any reasonable tribunal would convict Kaputo.

“From the evidence adduced by prosecution so far, the court should find the accused with a case to answer. At this stage the burden of the prosecution is barely to prove prima facie case against the accused and not to prove the accused’s guilty beyond reasonable doubt,” the State added.

Meanwhile, Kaputo’s lawyer asked the court to find him with a case to answer for manslaughter and not murder, arguing that the evidence of murder had not been sufficiently raised.